The density and diversity of life in the Amazon is truly staggering.  One of the first things you notice is the sounds.  There are so many birds, insects and frogs that there is a continuous symphony day and night.  By day, an extraordinary array of bird calls fills the air, many with beautiful songs.  As night falls the frogs call to prospect mates.  Through the dark hours, the cicadas produce a continuous wall of sound.

I had the opportunity to spend five days in the Amazon River basin of Peru in February of 2007.  We were based in a beautiful camp along the banks of the Maranon River, a tributary of the mighty Amazon.  The first days were spent walking through the forest searching for brilliantly colorful poison dart frogs and a fascinating array of insects.  We also explored the banks of the river photographing the many species of birds.

On the fourth day we headed up river for the Pacaya-Samiria National Reserve.  This flooded rain forest covers more than 5 million acres of the Peruvian Amazon.  During the rainy season, the waters of the Maranon and Ucayali rivers rise flooding up to 85% of the reserve. 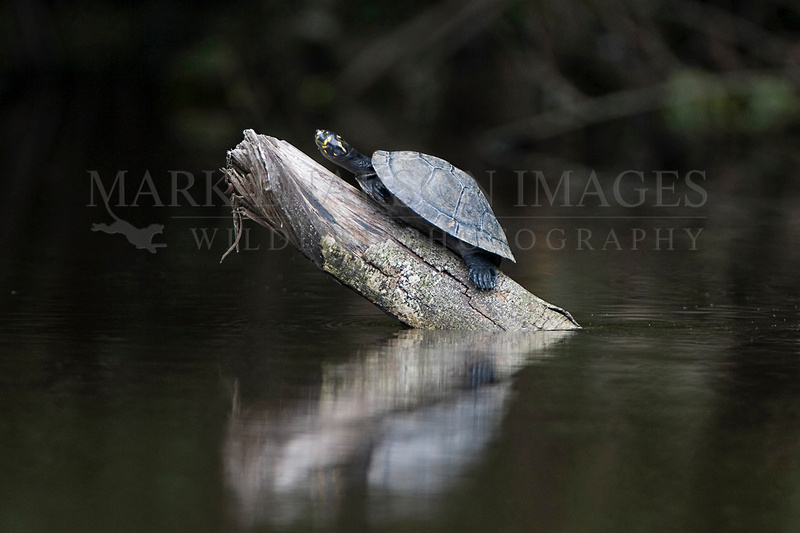 As we made our way up the river into the edges of the flooded forest, we were often visited by small groups of gray and pink dolphins.  I had never imagined that these amazing animals would be so frequently seen.  They are curious animals that spend a considerable time interacting and searching for fish with very little concern about the boats.  At the edge of the forest we left the comfort of the power boat for the maneuverability of a small hand carved canoe.  The canoes edge barely cleared the water as the guide paddled between the trees.  It is such a quiet, close and intimate way to see the Amazon.

In the trees above us we could hear the haunting cries of howler monkeys as they called between neighboring troops.  We carefully maneuvered our boat between thick trees and tree stumps to find our way under the calling troops.  The thick undergrowth required multiple stops to cut a path using a machete.  It was tempting to place one’s hand on the trees to help our progress until noting that the stumps were thickly covered with biting centipedes. 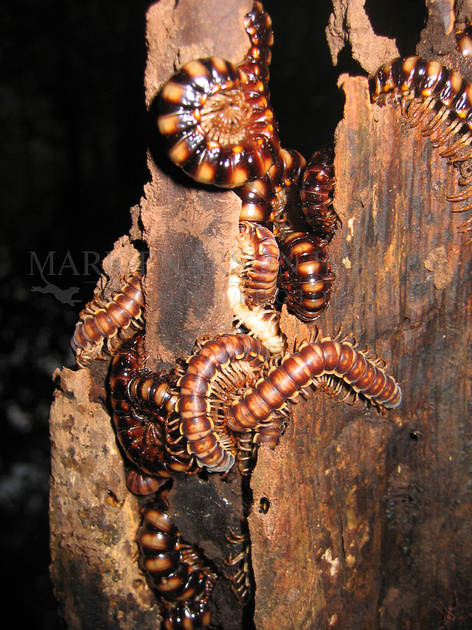 After a brief sleep we returned to the flooded forest the next day under the cover of darkness to find the area’s nocturnal species.  As the sun rose we found a large group of Common Wooly Monkeys in the trees.  While their name suggests that they are frequently seen, our guides had spent their lives in this area and never seen this species before.  The monkeys were curious about our presence but spent a lot of time making dramatic displays of territoriality.  They would jump on the branches and screech while keep strong and threatening eye contact with us.  As they passed over head pieces of the vegetation came raining down upon us.  I was able to obtain dramatic images of the wooly monkeys by laying flat on my back in the bottom of the canoe with the heavy camera body and 500 mm lens balanced on my face. 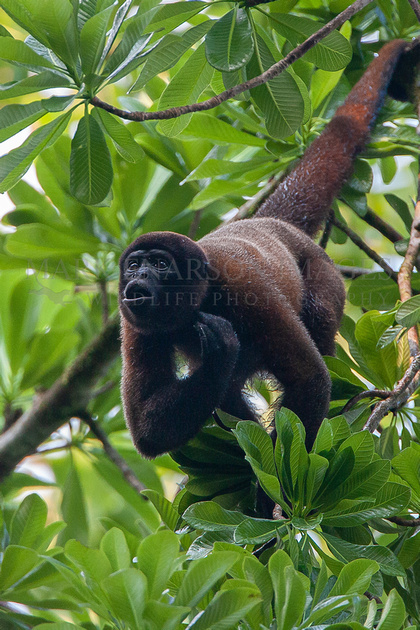 In our brief visit we found reason to fear for the future of this critical wildlife habitat.  Weather patterns are changing and less rain falls in this water dependent ecosystem.  It is tempting to conjecture about the role of global warming and the world’s changing weather patterns.  Further, the beautiful and colorful poison dart frogs are no longer as common as they once were.  For one, unscrupulous guides have recently been combing the forest floor and removing the frogs to sell to collectors in the exotic pet trade.  Further, experts warn amphibians are vanishing around the world.  While the reasons for the mass declines in world amphibian populations are not known, it has been speculated that factors such as climate change, habitat loss and absorption of pollutants through their permeable skin many be contributing to the loss of these beautiful creatures.

It was such a privilege to explore this beautiful region with its staggering diversity of life and critical role in the natural world.  I can only hope that it remains for future generations to appreciate and explore.