The Bears of Kodiak Island

On a cool, rainy morning in September of 2006 I boarded a small float plane and headed out into the wilds of the Kodiak National Wildlife Refuge to photograph the world’s largest bears.  Our destination was the Aleut Island Lodge.  From here we would explore the areas salmon streams in hopes of having some close encounters with the massive Kodiak brown bears.

This island in southern Alaska is home to around 3000 bears or 0.7 bears per square mile.  This population of bears has been cut off from its kin for about 12 000 years allowing it to diverge into its own distinct subspecies.  With their rich diet, Kodiak brown bears grow to massive size standing up to 10 feet on their hind legs and reaching 5 feet at the shoulders while on all four legs.  Most of the year, the bears eat primarily grass, plants, and berries.  However, during the summer, these bears descend from the mountain forests to feast on the bounty of spawning salmon in the rivers and streams. 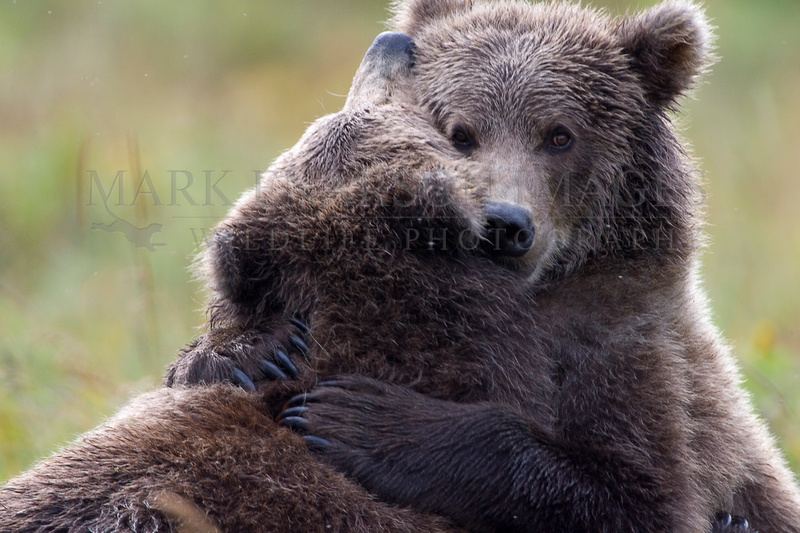 The goal of bear viewing in Kodiak is to remain undetected by the bears in order to observe and photograph the animals with little to no impact.  In addition to minimizing impact on bears, this strategy also allows for some beautiful intimate photos of bears behaving naturally without any awareness of being observed.  Each time we approached a bear, the guide was careful to keep us low and positioned down wind.  As a result of this practice, the bears are not habituated to the presence of humans and typically flee if they detect their human observers.  While this is best for the bears, trying to remain undetected does increase the chances of a dangerous surprise encounter.

While most flee immediately upon sensing humans, we met one bear who was more interested in observing us and displaying his size and power.  We came across this bear while hiking through the forest.  When he detected our scent, he approached instead of heading away.  He then found a suitable tree to climb and jumped up and down on a thick, low lying branch while observing us.  The overall effect of this behaviour seemed to be to impress upon us his considerable size.

Many of the females are accompanied by a couple of cubs.  The cubs typically stay with the mother for around 3 years before venturing off on their own.  The young bears are a fantastic photographic subject as they wrestle, play and learn to fish.  However, when dealing with cubs, it is obviously critical to remain aware of where the mother bear is in order to stay out of a very dangerous situation.  Our first encounter with a mother and cubs came early on the first day.  We were warned by the guide that the stream had high banks and any encounter was likely to be close.  As we quietly crept upstream we met a mother and cubs around the first bend.  Detection was unavoidable due to the close quarters.  Fortunately, this mother reared up on her hind legs to get a good look at us before fleeing into the underbrush with her cubs.

A much more intense encounter followed two days later while we observed a mother and two large 2 year old cubs feeding and wrestling in the shallow waters of the tidal flats.  This large mother bear forced us up onto a small rock ledge and kept us cornered while calling to her cubs.  The cubs wrestled for some time before joining their mother on the bank.  Unfortunately for us, the cubs were much more curious than the mother and approached us very close.  These cubs are very large and capable of some damage under the wrong circumstances.  The guide showed considerable skill and experience to dissuade the cubs from initiating contact while not provoking the massive mother bear into a defensive attack.

Another wonderful encounter followed early the next morning near camp as I was able to photograph two wrestling cubs from very close range.  The cubs again were aware of our presence but their curiosity kept them from fleeing as one would expect from a more experienced adult bear.  Again I was thankful for the experience and skill of the guide to maintain an awareness of the mother’s presence nearby.

On numerous occasions in Kodiak I felt deeply privileged to observe and photograph the bears under such natural and undisturbed conditions.  I feel that the resulting images capture intimate moments that I have not often seen. I hope you enjoy these images as much as I have.