Pursuit of the Natural Predation

Seal Island, a small rocky outcropping in South Africa’s False Bay, is the best place in the world to witness and photograph white sharks breaching. The white sharks launch their massive bodies from the water each winter morning in the pursuit of cape fur seals. In this location, photographers and film crews hope to capture the amazing shot of a 1-2 ton white shark flying as much as 10 feet above the water. Many of the available shots come from towing a decoy behind the boat to induce the animal to breach. If the conditions are right with limited water visibility and low ambient light, the sharks mistake the decoy for a seal and strike. 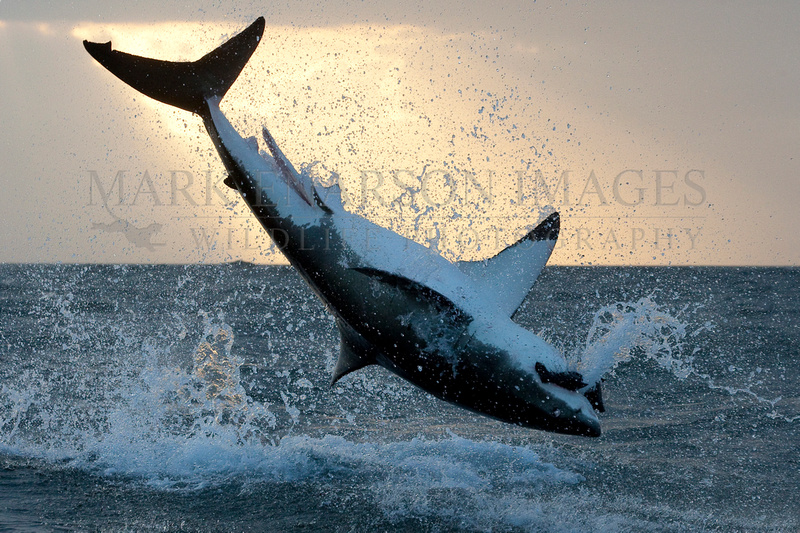 Much more difficult is the goal to photograph natural breaches. The sharks hunt in a perimeter of at least several kilometres around Seal Island with the majority of predations occurring before and just following sunrise. When the conditions are perfect this can result in spectacular photographs in the warm, golden light of early morning. However, much of the action occurs in the very low morning light and during the African winter when the sharks hunt seals, most days are overcast and often rainy extending low light conditions through much of the hunting period. The predation events are distributed widely around the island and if the sharks are efficient, the predation is usually over before you can get anywhere close. Not all predations involve breaching. In fact, most often all that is seen is splashing as the sharks tail cuts across the water surface during tight turns in pursuit of an elusive seal. Moreover, most of the awe-inspiring events with acrobatic breaches occur without warning or at distances beyond photographic reach. Only in a few cases when the seal escapes initial capture and the shark is motivated to continue its pursuit for a protracted time is photography possible. Even then, timing is critical to capture the sudden breach and if the shark breaches away from the camera position, the shot is less than satisfying. All of this makes for a tremendous challenge to pursue the ultimate photo of a natural white shark predation event. A world leader in white shark breach photography; South Africa’s Chris Fallows has recently estimated that each year there are only 10 good photographic opportunities at Seal Island. Obviously it is critical to be ready when the rare and fleeting moment presents. 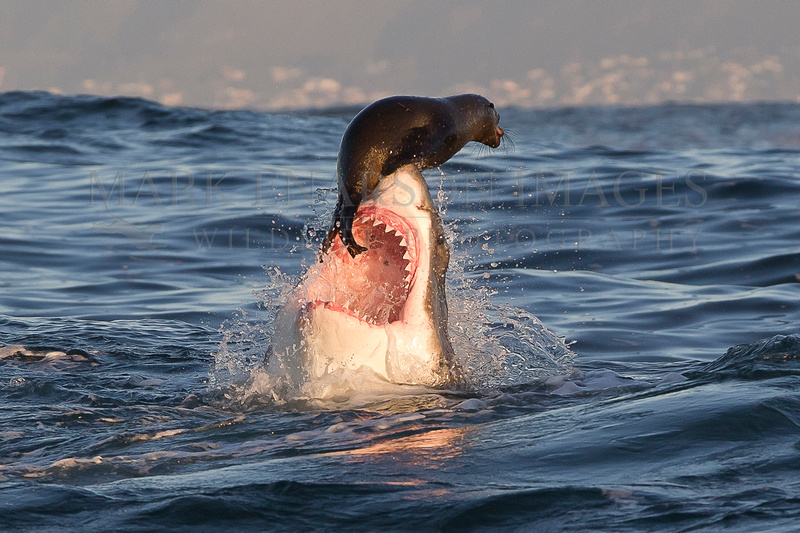 While I enjoy photographs of white sharks breaching on decoys and present these shots on my site, photographing natural predation is my true goal. This year my trip to Seal Island was made more difficult by some of the worst weather the region has seen in more than ten years. Each weather front followed the last bringing high winds and often rain without much break in between. BBC and Discovery Channel were at the island during the same period and each suffered the same frustration of losing multiple days to weather. As much as ever, the trip came down to brief, golden moments set apart from long periods of frustration. I was fortunate to capture a series of spectacular predations on the first day of my trip. After this, it became much more difficult. Some days the sharks seemed lethargic and lone, young of the year seals were able to swim up to the island uncontested. Other days the predations seemed to move subsurface which is very unusual for this region. These predations only come to attention when a boil of blood explodes from the water. Later in the trip, the predation activity was intense with 28 events recorded in one morning. However, the weather was very difficult that morning and the sharks were ruthlessly efficient with very quick kills. One must witness such predations to appreciate that the deaths resulting from these attacks are among the quickest and most merciful of any predator in the world. No photos were possible on these frenetic mornings but as always it was an incredible spectacle to witness.