Life in the Shadow of a Predator

The close presence of predators is a daily reality for many animals throughout the world.  Humans have insulated themselves from this reality by building up cities and pushing predators back into smaller and smaller natural spaces.  As a result, we have lost our sense of the natural order and we are shocked and angered when one of our own falls to a predator.  However, during winter at Seal Island, this primal struggle between predator and prey is a simple daily reality that plays out in spectacular fashion every morning.

Cape fur seals occupy this small island, near the foot of South Africa’s False Bay, year round.  Their numbers rise and fall with the influx and departure of breeding age adults and the birth of new pups.  Adult males return to the island in late October each year to compete for harems of females.  The breeding females return soon after the males and give birth to pups conceived during the previous year.  Within days of giving birth, the females mate again.  The newborn pups are about 75 centimeters long and weigh only five or six kilograms.  At about six months of age, the growing pups will join the older fur seals in taking to the sea in search of solid food.  Around the island, the fur seals hunt for small cat sharks, octopuses and crustaceans.  But, much of their fishing takes place as much as 50 kilometers out into the southern ocean.  This trip to the pelagic fishing grounds demands amazing survival skills from these small fur seals, for to reach the open ocean, they must survive passage through a gauntlet of hunting white sharks. 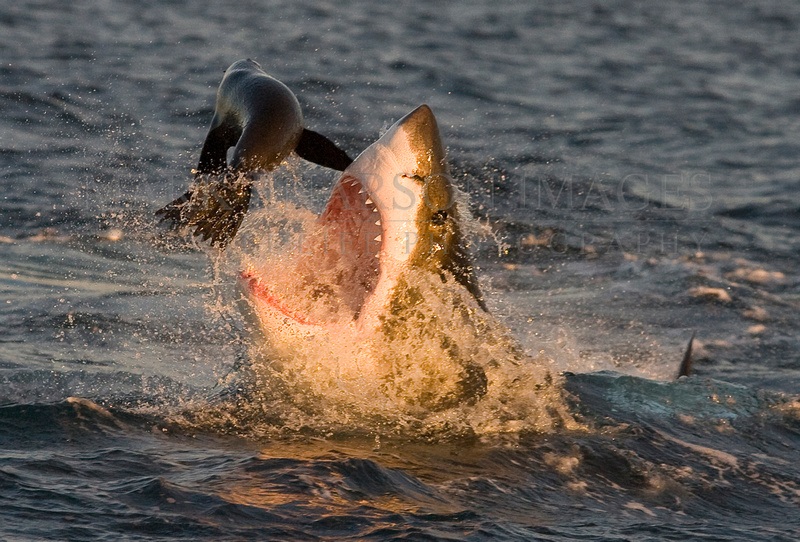 Although small and naive, the young of the year fur seals are far from helpless.  They are fast and agile with keen senses to detect approaching predators.  The sharks are also well designed for the hunt with incredible speed, deceptive agility and remarkable senses.  The strategies of the predator and prey are fashioned to counter the behavior of their adversary.  Obviously the seals must get out to their feeding grounds alive, while the sharks aim to capture seals with minimal energy expenditure and risk of injury.

Seals leaving the island gather near the southern extreme of the island under the cover of darkness, joining up into groups to strike out together.  The night time departure helps to cloak the seals from the visually hunting sharks.  By gathering into large groups, the seals benefit from many eyes looking out for sharks and the numerous porpoising bodies help to confuse the predator.  As the groups depart, some seals porpoise out of the water while others swim upside down watching below for attacking sharks.

Once the seals reach the open water, beyond the hunting grounds of the white sharks, they disperse and hunt alone.  Thus as the fur seals return from hunting, they typically do not benefit from the safety of the large group.  Furthermore, while they can time their departure from the island with the relative safety of darkness, it is much more difficult to time their long return.  As a result, some of the seals arrive back to the waters around Seal Island in the dangerous morning hours.  The twilight of early morning is the preferred hunting time for the white sharks.  During these hours, the low, early morning light does not penetrate far into the water column.  Thus, the hunting sharks are difficult for returning seals to see.  Conversely, the seals swimming above are back lit by the morning sun and quite visible to the keen eyesight of the white sharks.

Older and stronger Cape fur seals minimize the risk of this dangerous return trip by swimming along the bottom.  An adult male seal can make this final dive from as far as 800 meters from the island.  Younger seals, however, lack the strength and lung capacity for such long dives.  Thus, they must remain at the surface or return to the surface to breath in the danger zone near the island.  This leaves them vulnerable to the sharks’ devastating attacks.  Some of the youngest seals also appear naive to the dangers of swimming near the surface around Seal Island and swim the entire distance on the surface. 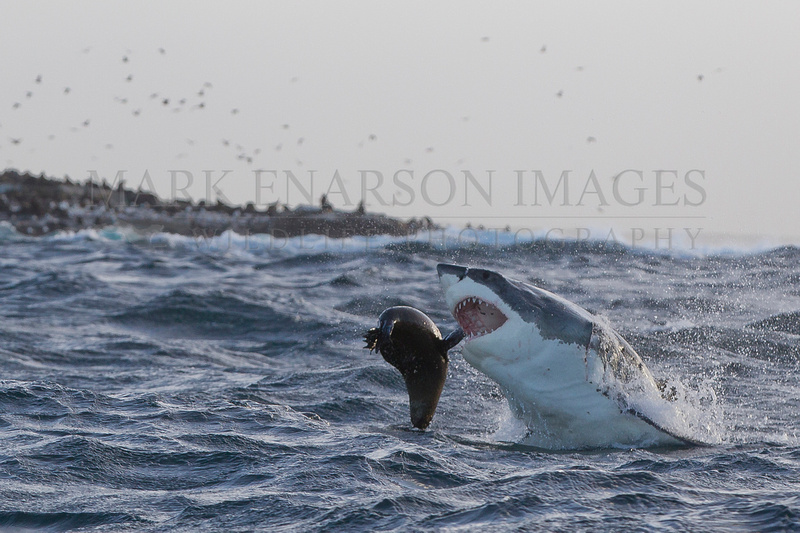 Attacking white sharks aim to kill the seals in a single powerful strike.  This minimizes both danger and energy cost to the attacker.  The shark swims 12 to 14 meters below the surface until it spots a vulnerable seal and mounts a well timed, explosive strike.  While the shark is much faster than the seal, it tires quickly.  The seal is slower but it can sustain its top speed for a considerable time.  Thus, stealth is essential for the shark.  The initial strike is so powerful that it often sends the white shark sailing as much as three meters out of the water.  If the seal can detect the striking shark it may be able to avoid the strike with remarkable agility.  After an initial attack misses, the seal tries desperately to stay near the safety of the shark’s tail until the predator tires and moves on to new opportunities.  For the survivor, the danger is not yet passed.  The noise of the first attack may attract other sharks and some seals must survive several attacks in order to reach the safety of the rocks on Seal Island.

Watching these predatory interactions, it is easy to forget that the seals are as young as six months of age.  The agility and skills of both predator and prey are incredible.  To watch a six month old seal acrobatically dueling with a three to four meter shark is awe inspiring.  It is tempting to think of the young seals as courageous.  But, this is not really accurate.  They are simply living the life they were allocated.  In order to feed, they must brave these attacks.  It is simply their daily reality.  Nevertheless, these young seals are amazing and admirable survivors.  While the white sharks are clearly the stars of this show.  They are some of the most amazing and powerful predators on the planet.  However, one must not forget the seals.  They are equal players in this predatory drama with incredible agility and survival instincts worthy of considerable admiration.