For a brief moment each autumn, a blanket of spectacular color falls across Alaska.  The progression begins as the underbrush lights in a blaze of reds and orange and continues in the coming days as waves of yellow spread across the trees.  The moment seems so brief and magical as the color fades in only a few days.  While it lasts, nature seems wrapped in a colorful drape.  The explosion of color comes at time of year when animals are making essential preparations for the rapidly approaching brutality of the Alaskan winter.

One of the best places to see this beautiful fall transition is in central Alaska’s Denali National Park.  This six million acre park was established in 1917 to protect the populations of large mammals living in the shadow of North America’s tallest mountain, Mount McKinley.  This towering peak is also known by its aboriginal name, Denali, meaning “the High One” in the language of the Athabascan native people. 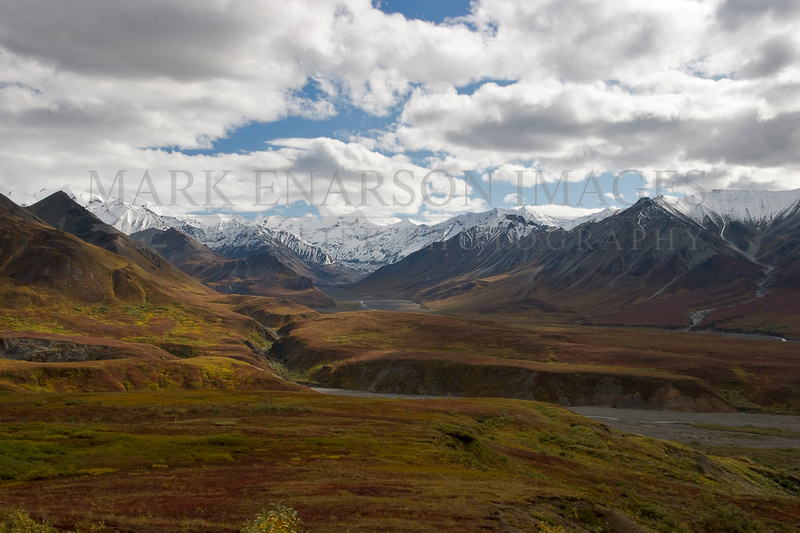 The subarctic wilderness in Denali National Park is cloaked with a wide variety of plants, specially adapted to surviving the long and bitterly cold winters.  The high grounds support flowering plants as well as many species of mosses, lichens, fungi, and algae. Along the rivers and valleys there is scant tree growth.  These sparsely treed regions are known as taiga.  Drier areas are populated by white and black spruce, quaking aspen, paper birch, larch, and baslam poplar.  Moist regions grow sedges and cottongrass as well as willows and alders.

A total of 37 species of mammals live in the park as well as 156 species of birds.  The park’s “big 5” are the grizzly bear, wolf, caribou, moose and Dall’s sheep.  Four of the animals are widely distributed through the park and are commonly seen.  Wolves are smaller in numbers and are much harder to spot. 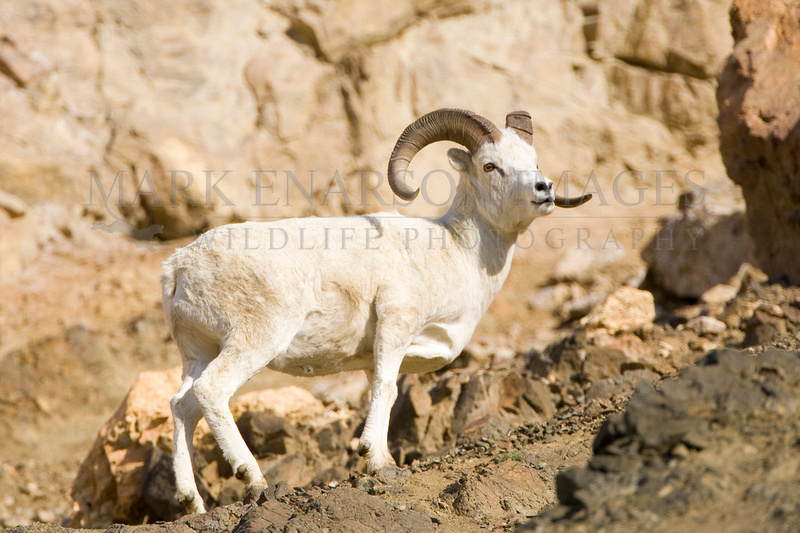 During the short autumn season, the park’s caribou herds begin to migrate westward across the park.  These herds are vulnerable to packs of wolves as well as grizzly bears that are trying to pack on precious fat reserves in order to weather the coming winter.  One herd of caribou that I saw passing trough a low valley was thrown into a panic when the caught the scent of a grizzly perched high on a ridge above the dry river bed.  Growth of the males’ antlers peaks in autumn.  These imposing weapons allow the males to battle for control of harems of females for mating.

Moose spend the autumn months foraging on the colorful willows that carpet the low areas of the park.  This season is the rutting time for moose.  Large males will tend to control harems of females while groups of younger males move together.  Moose is active in the cold, early morning hours and move deeper into the brush to rest during the middle hours of the day.  Many moose can be seen along the first 15 miles of the park road where public vehicles are allowed to drive.

Between 12 and 18 packs of grey wolves live in the park, totally about 100 animals, but they are uncommonly seen.  Each pack has an average of eight to ten members but the largest pride recorded in the park had 27 wolves.  The wolves hunt in groups and share food amongst members of the pack.  They hunt up to 10 hours a day in order to obtain the two to four kilograms of meat that each member need each day to survive.  These flexible hunters will stalk mice and ground squirrels as well as larger prey such as caribou, Dall’s sheep and moose.

Grizzly bears in Denali National Park are omnivorous but primarily subsist on berries and other vegetation.  As a result, these bears are smaller than other coastal brown bears in Alaska that live on a rich diet of salmon.  As a result of their leaner diet, grizzly cubs in Denali National Park usually live with their mothers for a longer period before striking out on their own.  While these bears eat primarily vegetation, they are ever ready to hunt and play a significant role culling the herds of caribou, sheep and moose.  On one visit to the park, I saw a mother grizzly and her grown cubs attacking a beaver lodge hoping to feast on the beaver.  Two bears dug at the top of the lodge while another waited at the exit of the lodge hoping to ambush the escaping beaver.  Fortunately for the beaver, lodges have more than one exit and it was able to escape while the bears were still attacking the lodge with vigor. 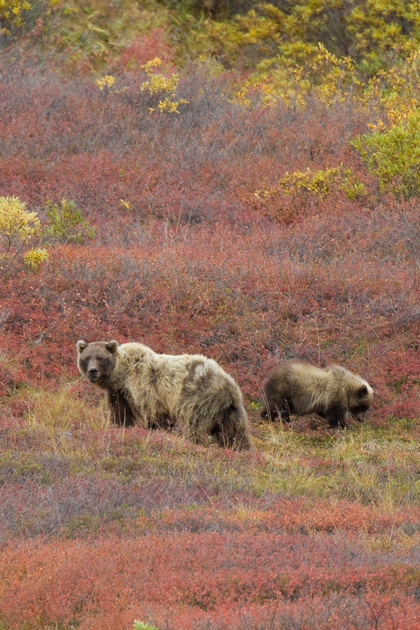 Photographic opportunities in the park are spectacular in the colorful autumn days.  Denali National Park is a large and beautiful park with many large animals.  However, in such an expansive park, the animals range widely requiring extensive travel to find the best opportunities.  Further, the park is admirably operated by the US Parks Service.  With a tremendous number of annual human visitors, the Parks Service does a very commendable job of keeping the park wild and preventing close interaction between the visitors and the wild inhabitants.  This is a critically important role of the officials but it makes wildlife photography difficult.