Cubs are born blind and defenseless.  Usually two to three, 1.5-2 lb cubs are born with each litter.  Their eyes open at 4-10 days of age and teeth appear at 3 weeks.  They spend the first 2 months of their lives hidden in a lair.  During this time mortality is very high with 72% of entire litters dying before ever emerging from the lair.  Lairs are simple, consisting of an area of flattened vegetation in a secluded area protected by an area of dense or high cover.  A lair must be well hidden from predators and provide shelter from the elements.   Survival of the cubs depends primarily on remaining hidden from predators but the ability of the lair to protect the cubs from the elements is also critically important as the cubs have limited ability to maintain their body temperature and in the cold and wet they may die from exposure.

Predation is the major cause of death for young cubs and the mother must take great care to prevent lions and hyenas from finding her lair with its defenseless cubs.  Lions are known to locate lairs by observing cheetah mothers sit up in the marsh or bush where the cubs are hidden or by seeing the mother entering or leaving the lair.  Lions then rush at the family of cheetahs and kill the cubs with a bite through the neck or skull.  A mother cheetah has no defense against the much larger cat.  As a result, mother cheetahs must be sly.  Mothers often return to the lair after dark which helps to prevent the predators from finding the lair.  Cubs are also moved to new lairs approximately every 5 days. 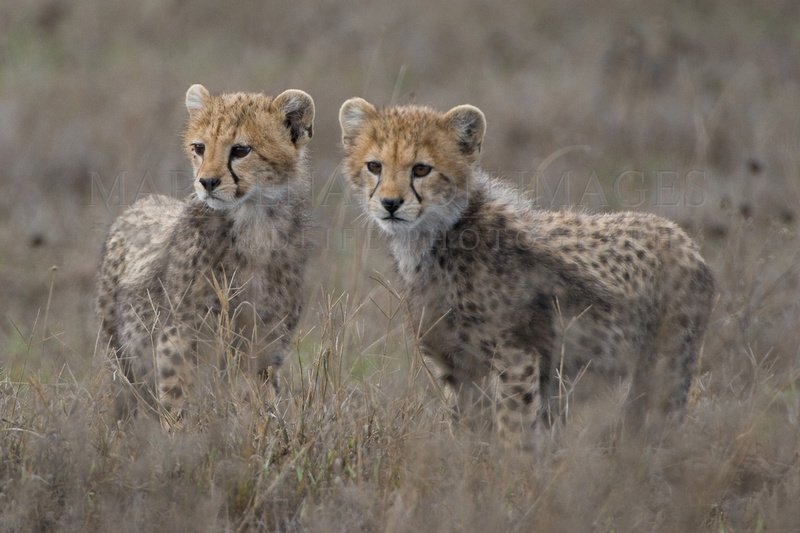 In the wild, mother cheetahs may not eat for several days following delivery of the cubs and may spend virtually all of that time with the newborns.  After this the mother must leave the cubs for lengths of time to hunt in order to meet the energetic requirements of lactation.  It is normal for cubs to be left alone in the lair for hours at a time.  Mothers spend an average of 9 1/2 hours away from the cubs on days when they hunt.  They are conscientious parents and almost always return to the lair the same day even if they fail to capture prey.  However, in some cases a mother cheetah will abandon her cubs if she fails to catch enough food or must range great distances in pursuit of gazelles.

Cubs grow at a rate of about 1 1/2 oz per day (44 g/day in males and 41 g/day in females).  The growth rate depends on the mother’s nutrition and growth of cubs drops off if maternal food intake decreases below 3.3 lb (1.5 kg) per day.  Conversely, growth rates do not increase if the mother consumes more than this threshold per day.

Surviving cubs emerge from the lair at about 8 weeks of age.  Predation results in considerable mortality at this point.  A further 53% of cubs are killed in the first month to six weeks after they leave the lair.  While these young cubs are still extremely vulnerable, some are able to survive an attack by scattering and hiding from the predator and later rejoining their mother.  Cub mortality drops off somewhat in the 4th month of life as the cubs are usually fast enough to outrun their predators.  However, at least 41% of cubs alive at 3 months of age subsequently die.  Overall, by the time the cubs reach independence by 18 months to two years, there is only a 6% chance of survival.

When watching a mother cheetah with her young cubs, one is struck with a mixture of admiration and sympathy.  The adult cheetah must contend with finding and catching elusive prey while keeping reigns on her playful cubs all the while watching for danger.  Meanwhile, the cubs are extremely playful without any apparent appreciation of danger or the consequence of their actions.  After a long day of travel to find suitable prey, I observed a mother cheetah and her two young cubs approach a herd of Thomson’s gazelles, a favored prey.  Initially the cubs remained hidden well behind the mother as she slowly and patiently stalked closer to the herd.  Her approach required considerable patience and care as the cover was minimal and if the gazelles were alerted to her presence all hope was lost.  The cubs played their role well initially by staying in hiding.  However, eventually the cubs appeared to grow restless and came bounding after their mother and jumped on her.  This occurred repeatedly over a couple of hours and each time the mother cheetah patiently played with and lovingly groomed the cubs before continuing the careful stalk.  I was mystified by her gentle grace with the cubs. 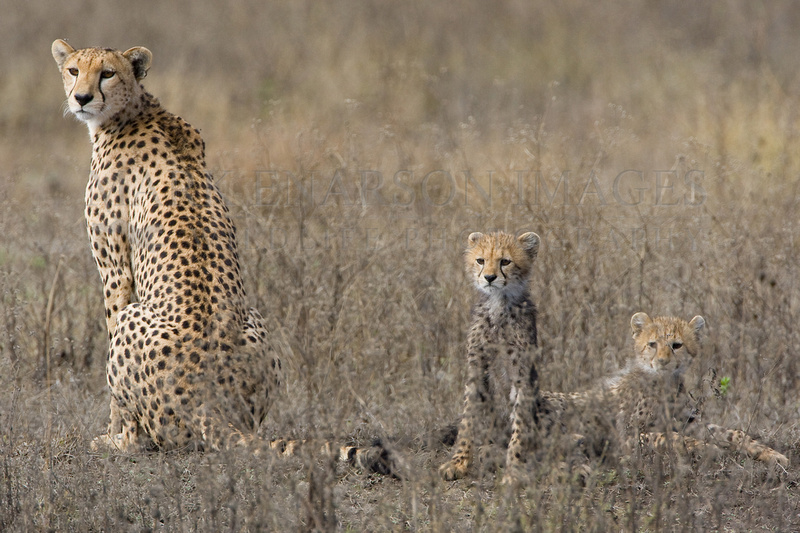 This time of life after the cubs leave the lair and become more active brings many new challenges for the cheetah family.  There is a continual need to find and kill prey all while nearby to other predators that would kill the cubs if given the opportunity or steal the prey item if the predation is revealed.  Kills are stolen by regularly by lions, hyena and leopards.  As mentioned previously, the mother must maintain a regular nutritional intake in order to meet the demands of the growing cubs.  Observations of cheetah families suggest that mother cheetahs are vigilant for potential prey during a hunt but her vigilance turns to potential danger once a kill is made.  Both of these forms of vigilance are observed to decrease as the cubs grow older.  While young cubs nurse from their mother they will also eat meat from the time the emerge from the lair to follow their mother.  Cubs are weaned at about 14 weeks of age.  After this time the mother cheetah invests less time in hunting as she is relieved of the energetic investment in lactation.

As a cheetah family travels across the savanna, the cubs regularly stop to wrestle, chase and explore novel objects in their environment.  It is a seemly carefree time for the cubs who appear to have difficulty discerning what objects are dangerous and what is harmless.  Cubs have been witnesses running towards a lioness while behaving defensively with hissing or flight from harmless birds.  A mother cheetah appears to give the cubs considerable freedom to play and will occasionally join in on some gentle wrestling and grooming at rest stops but all the while she must remain alert from danger that is never very far away.  This play chase contributes to development of all of the skills that the young cheetahs need for successful hunting.  At four months of age the cubs may pursue small animals that are not normal cheetah prey.  By five months they show more interest in pursuing larger animals.  At this age the calves will often chase down a gazelle fawn that has been subdued and then released by the mother for them to recapture.  At 6-7 months of age, the cubs can sometimes capture hares without assistance from the mother.  However, they are not yet able to capture a gazelle but will assist in killing a gazelle caught by their mother.  By 11 months the cubs will participate in stalking and chasing gazelles but most of the hunts are initiated by the mother.  At this stage, a cub will often jump to soon in transitioning from stalking to chasing the prey resulting in the gazelle being scared away.  Around this time, however, a cub may occasionally will succeed in hunting and they demonstrate the fundamentals of hunting that they will need soon as they become independent of their mother.  During the initial days of hunting alone, most young cheetahs are still inexperienced hunters but the skills gained from their mother have set them on a path to becoming skilled killers. 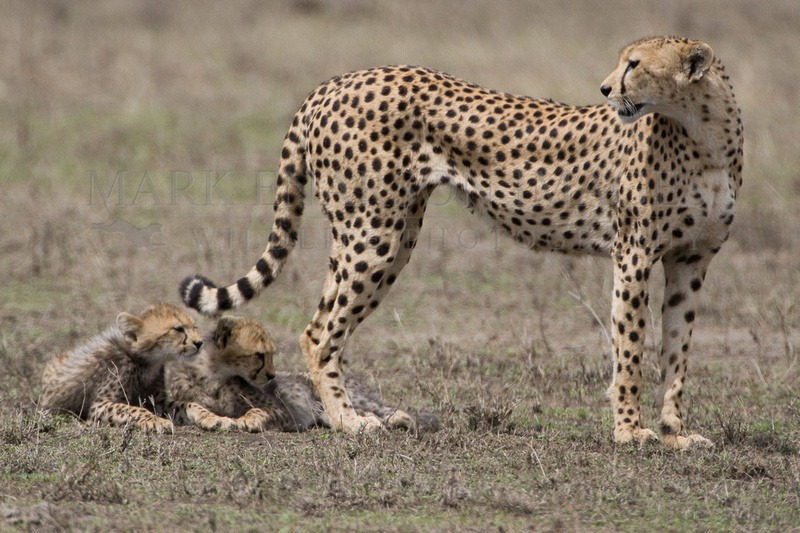 The average age at which cubs leave there mother for independence is 18 months.  After leaving their mother’s care, siblings remain together as a group for an average of 6 months.  After this time all female cheetahs become solitary except for raising cubs of their own.  Males on the other hand often stay together for several years and some male sibling live and hunt together for life.  After obtaining independence, 50% of male cheetahs are killed as a result of competition and conflict over territories.

Production of another litter depends on the success of rearing the previous cubs.  Mothers who successfully raise their cubs to independence will often conceive before the previous litter has left, however, they rarely give birth to the new cubs until after the family splits up.  A mother who loses her cubs will often search for and call for their cubs for several days following the death or disappearance.  She will then mate on average within 3 weeks of losing a litter.  Cheetah females cycle every 12 days and conceive readily after losing their young.  Some individuals conceive at first estrus just 2-5 days later.  Gestation is only 93 days and the mean time from the death of a litter to next successful conception is 18 days and to the next birth is only 111 days.  Thus, while cheetah mothers are dutiful and conscientious, nature has provided the means to rapidly replace lost cubs which is reasonable given the staggering mortality of young cheetahs.  In spite of the long odds which face the cheetah individually and as a species, most adult cheetahs are able to replace themselves in the next generation as on average two of their cubs will eventually reach reproductive age.  Life is not easy for the cheetah and their numbers remain at an endangered level.  However, through biological adaptation and and the continued efforts of diligent cheetah mothers, the species continues to hunt the plains of Africa as it has for many thousands of years.

[email protected] Com(non-registered)
There 8
Is a mom cheetah that has six cubs. I said it's photo shop
Other said no. Do you think she can raise 6 cubs