Seasons of the Great Bear

The year begins for a Kodiak bear deep below the Alaskan snow.  Within the den, a Kodiak bear spends the winter months in hibernation.  During these months, the hibernating bear does not eat, drink, defecate, or urinate.  As winter progresses, the bear’s body temperature drops slowly reaching a low of 12 ° C (21.6 ° F) below its normal active temperature.  Through some miraculous adaptations, the bear is able to minimize toxic waste products in its system by reabsorbing toxic protein breakdown products through the walls of the bladder and bowel and forming new tissue from these simple building blocks.  This biochemical marvel also mitigates much of the need for urination and keeps the bears body fluids in perfect balance through the cold winter months.  The bear’s heart rate also slows from a normal rate of 40 beats per minute to as little as eight beats per minute and then back to 40 for a short time each day due to spontaneous arousal mechanisms.  Oxygen consumption drops by 50% or more and carbon dioxide production decreases.  Somehow through these mechanisms the bear’s muscles do not waste; its bone remain mineralized and strong.

Winter dens are constructed at elevations of 100 to 3300 feet above sea level with most around 1800 feet along the steep slopes of Kodiak’s mountain sides.  They are typically sheltered by deep snow cover which helps to insulate the den against the cold.  The dens have a single entrance and a single chamber which is lined with branches.  Some are built with a tunnel and others open directly into the sleeping chamber.  Entrances are arch or oval shaped and average three feet in diameter and the chamber is arch or cone shaped averaging 5 feet in width, 7 feet in length and 4 feet in height.

Cubs are born in the den between January and February.  At birth they weigh less than a pound.  Their eyes are closed and they have little hair.  The mother bear wakes from her stupor briefly to give birth, eat the placenta and clean the newborns.  The typical litter size is 2-3 cubs with the number of cubs being determined by the mother’s nutritional status.  The cubs themselves do not hibernate but stay nestled into their mother, nursing and putting on weight.  The mother’s milk is from 25-33% fat, exceeded in richness only by that of some marine mammals.  By the time spring arrives, the cubs will weigh 15-20 lbs. 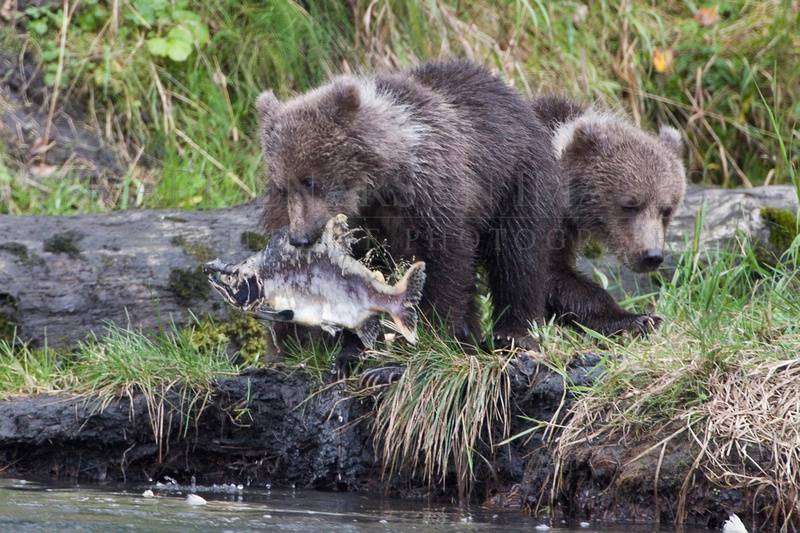 This young bear family will emerge from the den in April.  The first few days out of the den are filled with laying around, snoozing, and nursing as the mother’s hibernation state slowly wears off.  These first days are spent in the immediate vicinity of the den.  As the winter somnolence wanes, a serious hunger awakens in the mother.  She must eat to regain the weight lost during the hibernation months.  In the high mountain environment, snow still thickly covers the ground and their is nothing available to eat.  If the bears are lucky, they may chance upon the carcass of an animal that did not survive the harsh winter.  This protein is a tremendous find for a hungry bear.  Otherwise the bear will use her knowledge of seasonal food availability as well as her incredibly acute senses to locate food sources.

Most of the bear’s diet during this time is made up of a variety of plant species.  The bears eat each type of plant when it is rapidly growing during the spring and early summer.  This is the time when the plant is at its most nutritious.  Nevertheless, the overall nutrition of the plant is low when compared to its weight and bulk.  Therefore, the bear is highly attuned to any opportunity to scavenge the high energy protein of an animal.  Even then, high energy internal organs are eaten first.  The bears of Kodiak feed predominantly on high energy sedges in the spring which grow on the hillsides.  These sedges emerge earliest after the snow melts and store large amounts of energetic carbohydrates in their roots and rhizomes.  During this time, the cubs have a rapid growth rate and place heavy nutritional requirements on their mothers who in turn must make up not only for the nutrition lost over the winter but also for the energy passed on to the cubs through their milk.

Kodiak bears are among the largest bears in the world.  While some exceptional individuals must rank as the largest bears on the planet, the average size of a polar bear remains larger.  A large male Kodiak bear can reach 10 feet tall when standing on its hind legs and five feet tall when on all fours.  They reach 1000 lbs in weight and even higher in some cases.  Females are 20% smaller and 30% lighter than their male counter parts.

After grazing in the high mountains for 5-6 weeks, the bears abruptly descend for the arrival of the first spawning salmon as well as the ripening of highly nutritious berries.  As these lowland foods become available, the highland sedges are dropping in nutritional value and becoming less palatable.  By mid-August the bears are less frequently found along salmon streams and spend their time hunting the midlands for berries. 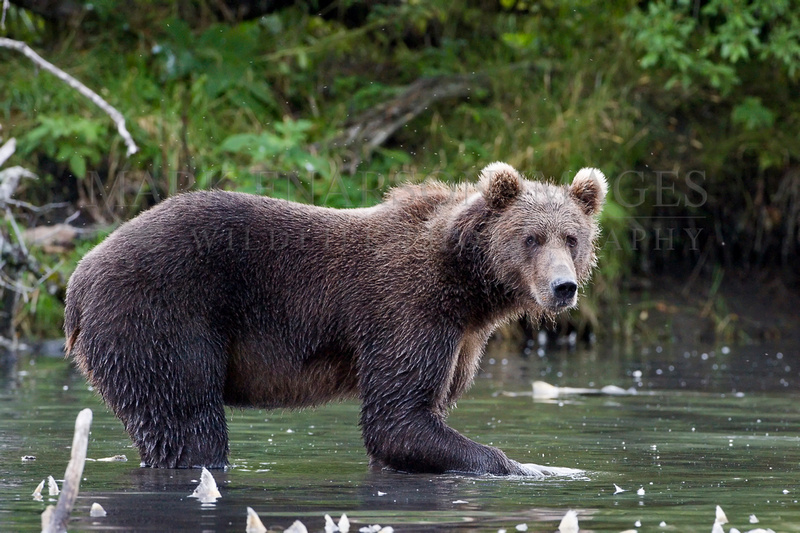 Mating season also takes place in the late spring and summer on Kodiak.  Males and females avoid each other for much of the year, due in part to their solitary nature and also to the threat posed by males to the young cubs.  Kodiak bears are induced ovulaters and a male will try to kill the cubs sired by another male in order to bring a female into estrous.  Over 25% of cubs die before reaching independence at two to three years of age and many of these deaths are due to male bears.  However, for roughly 55 days from late May into July, males and females form serially monogamous unions staying together for days or a couple of weeks.  The male attends the female during this time to maximize his fertilization of her eggs.  However, different cubs within a single litter are frequently fathered by different males.  Once fertilized, an egg will divide a few times before entering a state of suspended animation.  It then remains in this state until autumn when it will implant on the uterine wall and begin to grow again.

Most cubs stay with their mother until 3 years of age and the average interval between litters is four years.  During these 3 years, the young bears undergo an intensive education on how to utilize the resources in their environment and how to survive its threats.  Much time is spent in play as the young bears learn social skills that will help it to interact with other bears with minimal conflict.  The bears utilize a wide variety of food resources through the year, each with its own specific location and optimum timing.  This knowledge is critical for the cubs to learn in order to thrive on their own.  Upon leaving their mother, Kodiak bears become sexually mature at five years of age and will produce cubs of their own throughout their lives.  Mortality rate remains high for young bears in the first years after leaving their mothers as they face the challenges and risks of the environment alone.

In September and October, the bears return to the lowlands to feed on salmon along lake shores, tributary streams and tidal flats.  Alder patches at higher elevation continues to be used during this time for areas to hide and rest.  When salmon are plentiful, the bears may feed on only the most nutritious and fat rich portions of the fish.  These parts include the brains, eggs, and skin.  It is common to see the bears peeling the skin off of a still dying salmon while leaving much of the meat behind.

When the salmon are less plentiful, the bears will consume more of fish.  During the late stages of the salmon’s life cycle, after its eggs have been deposited on the river bed, the spawned out fish become lethargic and slow swimming.  This allows young cubs to try their hunting skills to catch these slow and easy targets.  While the young cubs do not necessarily eat these dying fish, the act of catching the salmon serves as good training for the future.

For most of the year, Kodiak bears are highly solitary.  Males forage alone and females maintain the company only of their dependent cubs.  During these times, the bears are quite intolerant of each other’s close presence.  However, when food is especially plentiful, the bears become much more tolerant and numerous bears can be seen fishing in relatively small areas of water.  When in these large groups, the bears utilize a complex body language and social structure which allows them to make use of the same high value feeding opportunity while expressing their feelings and minimizing overt conflict. 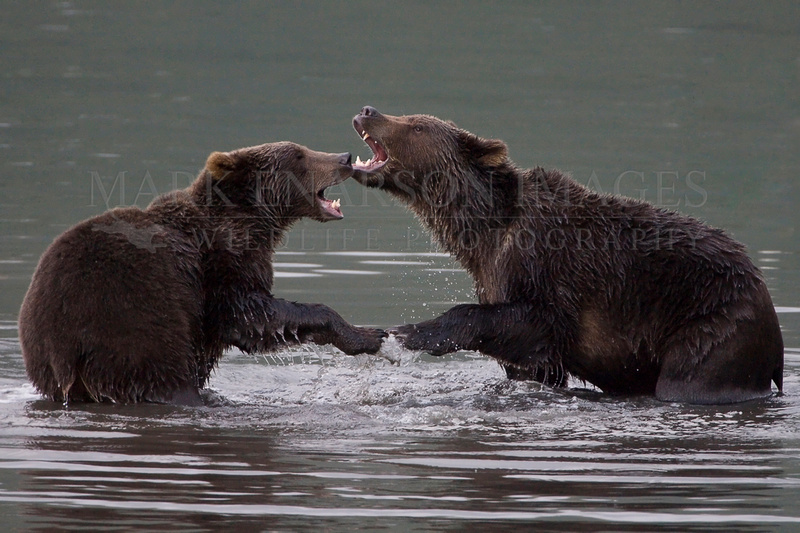 The bears’ tolerance of each other closely mirrors their tolerance of people.  Much of the time, Kodiak bears will flee at any sense of a nearby human.  Their incredibly keen senses of smell and hearing usually alert the bear well in advance of a bear-human encounter and the bear simply leaves the area.  The same flight behaviour applies when approached by a boat or low flying plane.

This creates a significant ethical issue for any human that seeks proximity with these bears for photography or simple viewing.  If the bears detect the human presence and flee, they are being displaced from critical habitat and in so doing are compromised in their all important mission to put on adequate weight for the upcoming hibernation and for bearing young.  Governmental agencies must consider this disruption when allowing human use of bear habitat.  Further, the individual who uses the bear habitat must be responsible for minimizing any stress and displacement upon the bears.  In our photography of Kodiak bears, great care is made to remain undetected and leave the bears in their natural, undisturbed state whenever possible.

Towards the end of October and into November the bears begin to return to their dens to prepare for another winter.  In the days and weeks prior to denning, the bears enter a phase of hyperphagia in which they eat tremendous amounts of food.  The bears’ calorie demands at least double and perhaps triple as they build essential fat for hibernation.  The fertilized eggs that entered suspended animation in the spring or summer will not implant if insufficient fat stores are built.  Moreover, there is evidence the selective abortion may occur in which one or two fertilized eggs are sacrificed in order to increase the probability that the remaining embryos will survive.  Even if the egg implants, if there is borderline nutritional status, both the mother and the newborn cub may emerge from the hibernation underweight, decreasing their chances of survival.  So, after eating as much as possible, pregnant females are the first to enter the dens and males are the last.  This brings another year in the lives of these great bears full circle with hopes for the next generation sleeping beneath the snow, dependent on the energy stored through a season of feeding in this rich and unspoiled wilderness on Kodiak Island.