At up to 30 feet in length and weighing up to 10 tonnes, the intelligent and pack-hunting orca is unrivalled as the ocean’s top predator.  Roughly 100 000 years ago, orcas divided into separate populations which have been called the residents and transients.  These groups have developed differences in social structure, anatomy, diet, and hunting strategy.   Resident orcas live in larger, life long groups of a mother and her generations of offspring.  These highly vocal orcas seem to feed entirely on fish.  Transient orcas on the other hand have a more fluid social structure and silently hunt primarily mammalian prey in smaller groups, vocalizing primarily after or between hunts.  Observations of the transients hunting and killing large whales provided the source for the common name “killer whale”.

Although these groups may live in similar areas, the residents and transients never mix.  Their interactions range from avoidance to outright aggression in rare cases.  Many of the differences between the groups seem to ultimately relate to their effects on predatory strategies.  In groups of resident orcas, individual orcas never leave the group into which they are born and stay with their mother and siblings for life.  These groups can contain a mother and up to five of her offspring with multiple generations of reproductively active females (called a “matrilineal group).  As a result, up to 4 generations of related orcas live together.  A typical resident pod contains one or more related matrilineal groups of up to 30 or more orcas.  These large groups likely benefit the resident orcas who must hunt for widely spread schools of fish.  Having more individuals in the group to find the fish must increase their ability to hunt. 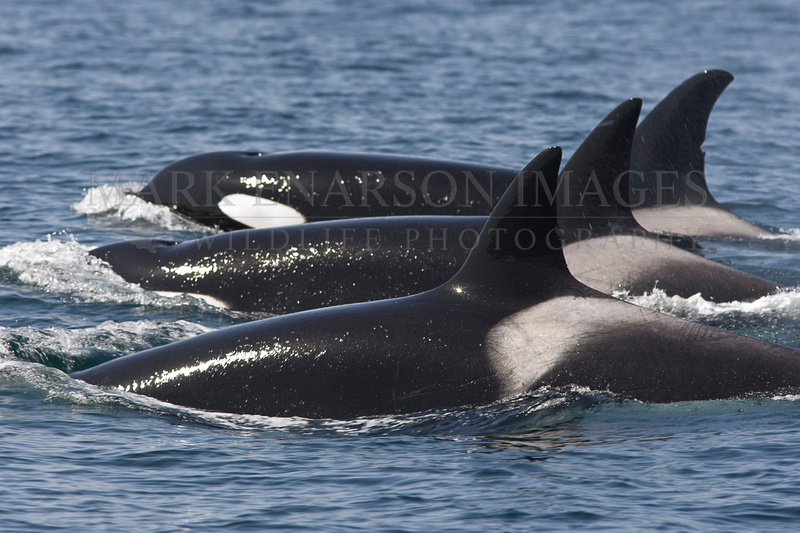 In transient orca societies, young orcas of both sexes may leave their mother as a juvenile or adult to travel alone or to join with other transient orcas.  Further, this dispersal from the group where they were born is not always permanent.  First born males are likely to stay with their mothers.  Others might be forced to leave as increased group size makes it more difficult to mount sneak attacks on marine mammals.  Females seem to disperse around sexual maturity.  While adult males may travel alone as roving males, females do not.  Females associate with multiple transient pods for short times with each of these pods containing an adult male.  Roving males move from pod to pod or travel alone with no enduring relationships.  These roving males never travel together or with other lone individuals.

Stable transient pods typically have three to five individuals.  This number likely represents an ideal number for stealth hunting.  Certain types of prey seem to require larger groups such as large and dangerous prey like grey whales.  Individual pods tend to regularly associate with other pods that have similar hunting tactics and socialization to undertake these hunts.  When small pods group together for hunting, they also spend a considerable amount of time socializing.

In all orcas, gestation is 16 to 17 months long.  Babies are roughly 2.5 m in length at birth and weigh about 200 kg.  These calves nurse until at least one year of age and many continue to nurse beyond this time for social and bonding reasons.  They begin taking solid food around six months of age.  Mortality for calves is approximately 40% in the first year of life.  Young orcas spend much of their time with their mothers.  They participate in hunts and are taught the tactics of their group.  Orcas become sexually mature between 11 and 15 years of age in females and between 12 and 14 years in males.  Males ultimately reach 8-9 m in length and weighing 9-10 tonnes while females are somewhat smaller at 7-8 m in length and weighing 7-8 tonnes.  Females continue to give birth every 3 years or more until they are about 40 years of age,  Orcas are unusual among mammals in that females live beyond their reproductive years like humans.  The average life span of an orca female is 50 years while the average is only 30 years for males. 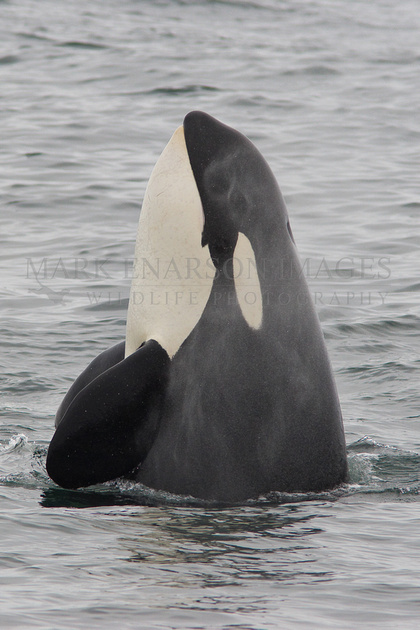 Resident orcas are highly vocal with each group demonstrating a well developed dialect of calls.  These calls may be clicks which are used for echolocation or harsh, strident burst-pulse calls and whistles which seem to provide a means for the orcas to communicate.  These calls are mostly used when the group is out of visual contact.  Each resident group has a characteristic series of calls which are stable over time and are taught to their young.  Transients by contrast are relatively quiet.  They have fewer calls which tend to be broadly shared between groups.  A resident group will have between 7-17 distinct calls whereas transient groups have only 4-6 calls of which at least two are common to all transients.  The commonality of transient calls likely relates to their fluid social structure whereas the smaller number of calls is likely a function of their hunting strategy.  Unlike fish, marine mammals are highly sensitive to the high frequencies of orca calls.  Thus, a transient’s prey is easily able to hear these calls and would flee the hunting orcas.

As a result, transient orcas are quiet and stealthy while hunting.  Like residents, they use echolocation clicks but they use these clicks in short, irregular bursts that can be camouflaged by the snapping and popping sounds made by marine invertebrates in near shore waters.  This allows the transients to get a brief snap snot of their prey’s location without revealing their own position.  In addition to echolocation, the transients passively listen to the sounds of splashing and swimming that alert them to the location and movement of the prey.  This all contributes to an ambush strategy of hunting. 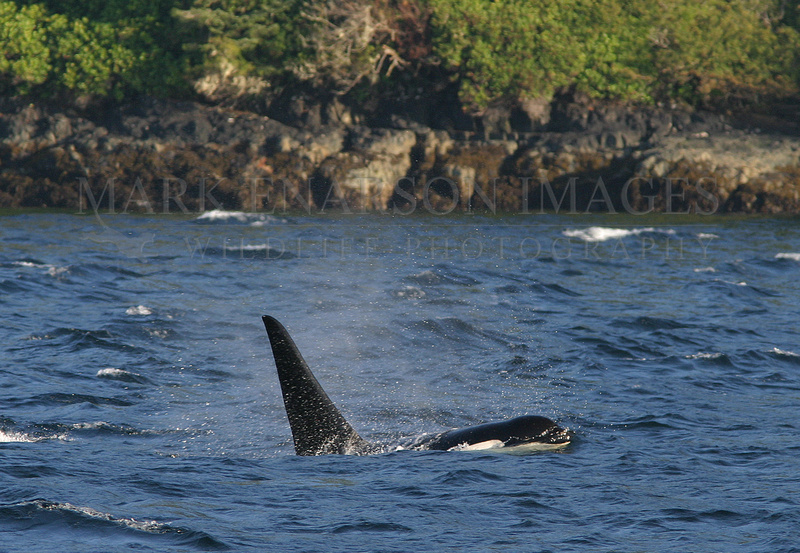 A stealth hunting lifestyle requires that the transients are always on the move.  If they stayed in any one place for too long, their prey would become alert to their presence.  The transients hunt in two general locations.  They spend part of their time hunting near shore waters, swimming close together while hugging the shore line in search of seals and sea lions.  In these locations they often demonstrate considerable knowledge of good hunting sites, heading directly to local seal and sea lion haul out spots.  Open water hunting is used to hunt for porpoises and dolphins or less frequently for large whales.

Attacks on small seals can be over quickly.  These small animals are a relatively easy and low risk prey for the transients and as a result, these attacks are usually successful.  The orcas either chase the seal and grasp it in their mouths or strike it with their tails in order to immobilize the victim.  Larger prey such as a male Steller or California sea lion are less common requiring more effort and risk.  The orcas will only attempt a predation on these large animals if the conditions are favourable.  They help to mitigate the risk by  attacking in larger groups.  If the animal is intercepted far from land, the orcas will surround the sea lion and then take turns charging the prey to ram it or strike it with their tails.  This type of attack may take an hour or two leading to the sea lion tiring so that the orcas can drown it.  With this type of prey, the attack is frequently not successful with the large sea lion escaping roughly 50% of the time.  Once the animal is killed, the resulting food is shared among the orcas including between members of different pods that join together for the kill.

Dolphins and porpoises represent a different challenge.  While not large or dangerous, these animals are extremely fast and agile.  Again, the orcas join together into larger groups in order to cut off routes of escape and capture the fleeing prey.  Pacific white-sided dolphins require another modification in technique due to the extraordinarily large groups in which they often travel.  In these chases, the transient orcas will seek to isolate a small group or individual from the larger group before they capture ad subdue the dolphin.  Because of their speed and agility, it is not uncommon for Dall’s porpoises and dolphins to escape. 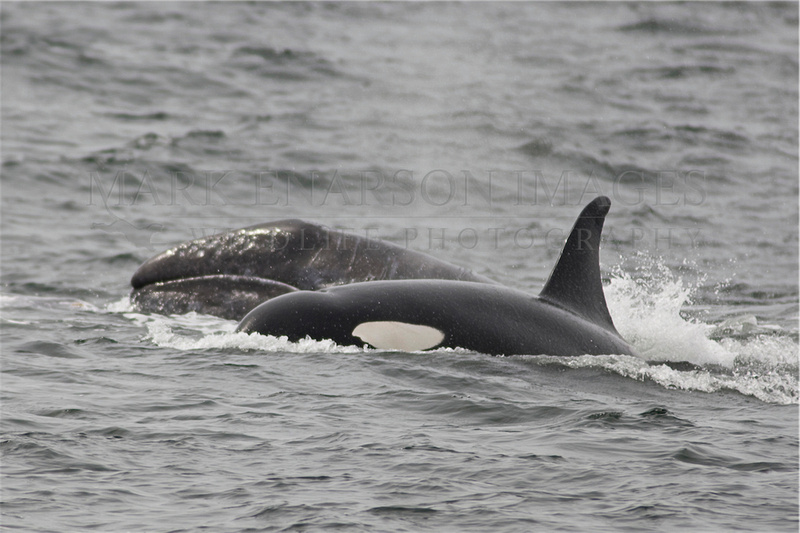 Overall, large whales are probably rare targets for transient orcas.  They represent an entirely different level of difficulty and danger to the attacking transients.  In these cases, several smaller pods group together to separate a calf from its mother, before the batter and drown the young whale.  This is most commonly seen over the Monterey Canyon in spring, but is likely also a regular occurrence in winter calving grounds.  Up to 20% of humpback whales bear rake marks from the teeth of transient orcas and these may represent the orcas testing the humpbacks in order to find a weak or vulnerable individual for a full on assault.

In watching an attack by transient orcas, it is clear that these are the apex predator of all the oceans.  In fact, a small group of transient orcas in northern California appear to have developed a specialization for hunting great white sharks.  Found in all of the world’s oceans where food is abundant, orcas are the pinnacle of predator development.  Through their size, speed, co-operation and intelligence, these magnificent animals have mastered their domain and reign supreme in the watery realm.